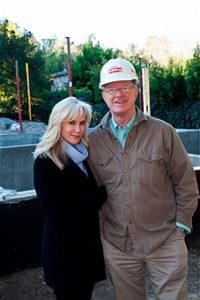 There are the people that talk the talk, and then there are those who walk the walk. When it comes to Green Living, Ed Begley Jr. isn’t messing around. Ed is that one guy that you know from pretty much everything. He’s appeared in hundreds of films,TV shows and stage performances. He is probably best known for the TV series St. Elsewhere, for which he was nominated for six Emmys and a Golden Globe. What you may not know, is that Ed Begley Jr. is also an avid environmentalist. Recently, Ed built the greenest home in America, with a LEED-certified Platinum rating. Ed and his wife built the home to meet both of their needs – a gorgeous French country house for her, environmentally progressive for him. The home boasts 12-inch walls for optimal foam-filled insulation, a recycled-steel frame, a grey-water recycling system for irrigation, water-saving appliances and faucets, a passive solar design, a 10,000-gallon rainwater tank… the list goes on. One of the facets of his green home that Ed is most proud of is his Lutron automated lighting and shades system. “They (Lutron) have played a key role in making my home more energy efficient.” Not only do his shades raise and lower on a time clock, but all of his lighting works on Lutron dimmers to save energy. Top: Ed Begley Jr. with his wife Rachelle Carson-Begley on-site during construction of their LEED-certified home (Getty Images).   ENERGY SAVING TIP: Everyone knows that LED bulbs save money—but did you know that you can save even more by dimming them? Dimming to 50% not only reduces electricity use by half, it helps to prolong the life of the bulb. 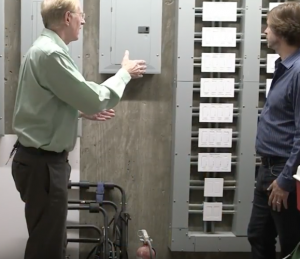 Left: Ed shows off the extensive Lutron dimmer control panel in his basement. See below for the link to the video. In multiple interviews, Ed – who has an ongoing competition with Bill Nye for who has the lowest carbon footprint – explains the rewards of dimming, and how accessible Lutron dimmers are for the everyday homeowner looking to save money and go green. Not only are you saving money on your electricity bill, but – when paired with LED lighting – you greatly reduce your carbon footprint, create less demand for foreign oil, and promote cleaner air in our cities. Dimmers are a fantastic start, but Ed took it a step further and added automated shades on a astrological time-clock to harness daylight and block heat.  Automated shades are a great way to accent your home and add some serious eco-friendly points. Manual shades are great in theory, but we never actually adjust them throughout the day as we should for the optimal sun shade and heat protection, which is why automated shades make so much sense. With all of this energy saving, how much is Ed’s electricity bill? Running the house and pool, and charging the car cost Ed a mere $36 per month. Most of that is due to the pool, which he forgot to take into account when building his system.   Ed says “Start small and build up. Get one dimmer… Do something today.”
Call Us Now: 310-836-9333